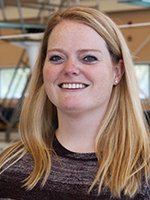 During her time at WashU, Kaupp helped guide some of the most successful teams and swimmers in school history, which included:

Prior to WashU, Kaupp spent three years on the staff at Southwestern (Tex.), spending her first two seasons as an assistant before being elevated to interim head coach in 2009. In that year, she earned the Southern Collegiate Athletic Conference (SCAC) Women's Swimming Coach of the Year award after the Pirates recorded their first NCAA Division III national qualifier in program history.

Kaupp, who has served on the NCAA Division III Swimming & Diving Championships Committee from 2017-19, graduated from Lewis & Clark (Ore.) with a bachelor's degree in history.